His Serene Highness Prince Albert II of Monaco honoured our country with his visit. Following his visit, he was delighted by the gift offered by Chateau Vartely – a magnum of Taraboste Cabernet Sauvignon 2014 wine.

Being on his official visit to the Republic of Moldova within May 4-5, 2017, Prince Albert II of Monaco met with the Prime Minister Pavel Filip, the President of the Parliament Andrian Candu and the Head of State Igor Dodon. The official also visited the Moldova State University and met with the children’s team of the Zimbru Football Club.

At an official reception, Chateau Vartely handed Prince Albert a very refined wine – Taraboste Cabernet Sauvignon 2014. A custom wine label with the coat of arms of Monaco and the name of Prince Albert II was created on this occasion.

Exclusive wines Taraboste are a tribute to our ancestors, who developed the traditions of Moldovan winemaking. They are an expression of commitment and high skills in winemaking.

Produced in limited quantities, about 8-9 million bottles per year, Taraboste wine is a triumph of taste, obtained through the use of very ripe grapes and aging in barrels. Outstanding flavours and aristocratic notes are like diving into the history of their ancestors. 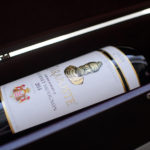